All Categories » 1. Tesla Field Recorder (iOS/Android)
I cannot understand how to use the app!
Last Updated 4 years ago

1. Magnetometer readings using the sensor of you mobile device.
2. The ability to record these readings for a longer period of time.

Magnetometer sensors are pretty common in mobile devices. They are mainly used to provide compass functionality, but since they also are very sensitive to magnetic fields in general, they can be used to measure such fields. The app relies on real sensor readings, so there's no "fake" or novelty features.

Calibration
But please note that the magnetometer sensor in your device needs to be calibrated regularly, in order to provide correct readings.

Here's a graphical animation provided by Google that shows one of the ways of doing that:

Sensor readings
The sensor provides the electromagnetic field strength for three directions (X, Y and Z) shown in the image below: 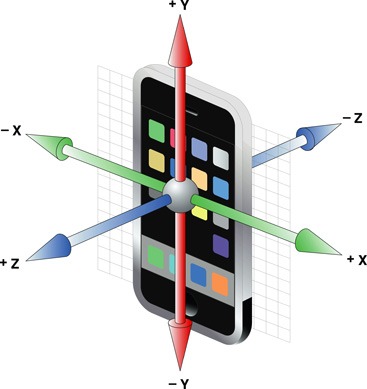 In the app the following colors are used to represent each axis:
Based on the strength on each axis, the app then calculates the total strength of the magnetic field, which is called the Magnitude. The Magnitude is colored with Cyan color in all diagrams.

The Magnitude is calculated using the following formula:

Earths magnetic field
Since Earth has an iron core that spins, it constantly generates a magnetic field. This field is essential to all life on earth since it is our best protection against the radiation from the sun. Scientists recently discovered that Mars also had an earth-like atmosphere, but since Mars doesn't have a spinning iron core, the atmosphere decreased to such a degree that the planet now is barren and cold.

Depending on where you are on the planet, the app will therefore pickup various degrees of the electromagnetic field that Earth produces. Normally it will be between 25 to 65 microteslas which is the same as 0.25 to 0.65 gauss ( 1 gauss = 0.0001 tesla ).

Please wait... it will take a second!